When a craving for middle-eastern grub strikes, what immediately comes to my mind is Arab street with its colourful lanes dotted with tens of vibrant and artsy restaurants. Being new to Singapore and with that reference in mind, I wasn’t sure what to expect when a friend recently invited me for a middle-Eastern lunch at CBD; but boy was I pleasantly surprised. Kazbar is an authentic middle-eastern  restaurant nestled among a row of restaurants and bars in the heart of Singapore’s Central Business District that has been a popular gathering place for office goers since 2002.

A quick look through Kazbar’s menu, and I was impressed by the number of clearly labelled vegetarian items. After a conversation with the friendly staff, we were informed that several of the vegetarian dishes are inherently vegan, but not marked as such keeping in mind the risk of cross-contamination on account of the kitchen not being dairy and meat free.

As I was getting ready to overload on the EVOO, Executive Chef Kamel Fakih laid out a marvellous spread of cold and hot mezze, all vegan, that made for a very pretty picture and a delicious meal. Since the chef prepared a special tasting menu for us, we were able to try several dishes, thanks to the smaller tasting portions.

My favourite part of any mezze is always the dips & bread and there are plenty at Kazbar to choose from. The Hummus is smooth but thick and creamy and tastes as good as it looks. If you’re a fan of smoked eggplant, there are two delicious options to choose from – the classic Babaghanoush – where the chargrilled eggplant is mixed with tomato, capsicum, onion and garlic and Moutabel – with flavours of tahini, garlic and lemon – which takes the humble aubergine to the next level. And if you can’t choose, I’d say just get them both like we did, you won’t regret it!

While all these dips were fantastic, my favourite, undeniably was the Hummus Beiruty which comes loaded with tomatoes, pickled cucumber, herbs and spices. A twist on the classic hummus, it almost has a yogurt-like consistency that is incredibly refreshing. Rest assured; it is 100% dairy free – I checked…twice! The only dip that disappointed me was the Mohammarah. Having eaten it a dozen times before, I was expecting it to have the same peppery sweetness it is known for, but Kazbar’s version is rather tart and spicy and that did not appeal to me.

From the salads, both Fatoush and Tabbouleh are fantastic, vegan and make for great accompaniments to the dips and bread. The parsley to bulgur ratio in the Tabbouleh is on the higher side making for a very non fussy, light and herby salad. For a heartier and flavourful bite, Fatoush ticks all the boxes. A mix of cucumber, lettuce, tomatoes and mint, it is topped with crispy pita and a generous drizzle of EVOO. 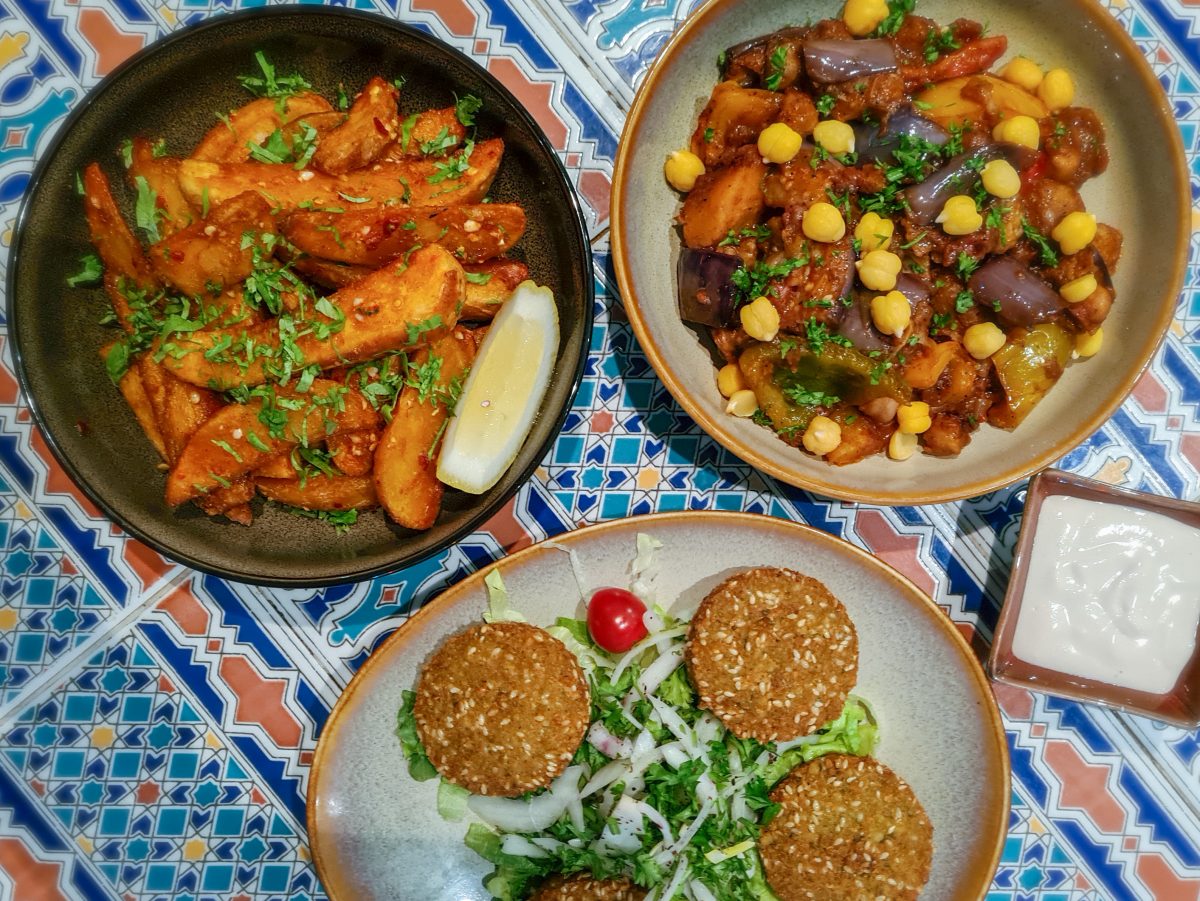 Next up, the hot mezze! The Falafel comes with a side salad and tahini, is perfectly crispy on the outside and incredibly soft on the inside. I have to admit, I ended up eating more than my fair share of these chickpea and coriander patties. Kazbar’s  Batatas Harrah – spicy potatoes seasoned with garlic, harissa and lemon juice – looks and tastes like a close cousin of the Spanish tapas dish Patatas Bravas! I love me some fried potatoes, so no matter what name or form they come in, I definitely have no complaints. The show stealer from the hot mezze though was the Garlic Spinach. This dish of spinach sautéed with garlic and EVOO and garnished with crispy, slightly caramelised onions is simple yet delicious. Do take note that this is normally drizzled with yogurt, so do remember to request for the vegan version.

While I loved the fact that Kazbar has a huge variety of vegan dips and starters, I was most excited by the mains on offer. While most middle eastern restaurants are somewhat veg-friendly, the veg factor is mostly limited to starters and salads, with mains being meat heavy. Kazbar surprised us with 4 vegetarian mains – Artichoke Stew, Mousaka, Couscous Khothar and Potato & Cauliflower Stew – not counting the Falafel Pita Wrap that they also offer.

We tried the Mousaka, the chef happily omitted the cheese to make it vegan. The Mousaka comes with perfectly grilled layers of aubergine, potatoes, capsicum and onions, baked in a well-balanced tomato sauce. To me, the dish tasted a little incomplete without the cheese to bring it together, but my friend loved every bite. She finds Mousaka to usually be a little too cheesy and much preferred Kazbar’s vegan version where the veggies are the heroes of the dish.

Our lunch at Kazbar was definitely one of those experiences where I didn’t feel like the dreaded vegan customer in a non-vegan restaurant. The staff was friendly and warm and excited to showcase the delectable veggie fare that was varied, well thought out and delicious . There are so many vegan and vegetarian options at Kazbar that you can easily make a dedicated green menu out of it (and I hope that they do). While I was very happy with my meal, a flaky, decadent vegan Baklava would have really taken it up a notch. Fingers crossed for next time!

« The Diwali Vegetarian Experience at the Tiffin Room, Raffles Hotel
The Clean Addicts: Handcrafted cakes that are vegan, healthy, delicious, made with real food and for just about anybody »