Chat with us on
Whatsapp 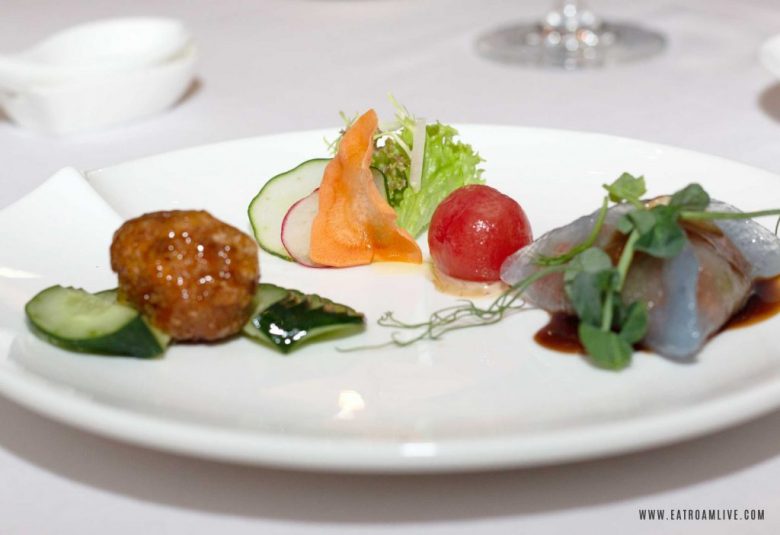 The Fullerton Hotel is widely regarded as a historic and beautifully conserved piece of architecture in Singapore. Sustainability is a key tenet of The Fullerton Hotels & Resorts’ corporate philosophy. Jade, one of its distinctive restaurants, represents a fusion of heritage, design, culture, and exquisite dining that is unique to the Singapore culinary scene. Jade has been offering diners authentic Chinese cuisine of exceptional quality for the last 11 years and has now launched ‘Taste the Future‘, a special plant-based five-course menu (S$68++ per person) that is a next step towards sustainable living. All of the menu’s mainstays are pure vegan, made with no meat, eggs or dairy. 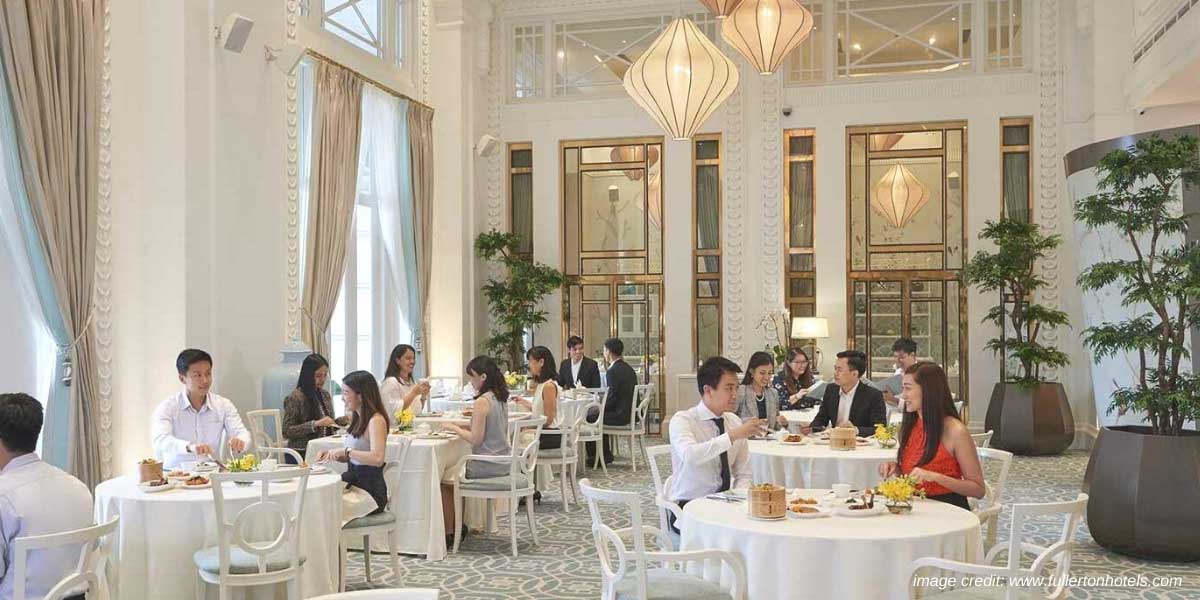 The carefully curated menu showcases the versatility of vegan dishes without compromising on flavour. Chinese Executive Chef Leong Chee Yeng drew inspiration from his own personal vegan-dining journey in the creation of the dishes. In place of meat, the menu features Omnipork, a nutritionally superior analogue prepared from a blend of plant-based protein from pea, non-GMO soy, shiitake mushroom and rice. To ensure a rich, nuanced tapestry of textures and flavours, Chef Leong pairs it with over 30 fruits, vegetables and other natural ingredients such as beancurd skin, soy milk and seaweed.

All this sounded interesting and intriguing enough to me and given how experimental Ganesh and I get with food, as long as it is vegan, we decided to try the Taste the Future plant-based menu at Jade, The Fullerton Hotel Singapore. Here is our verdict on the menu! 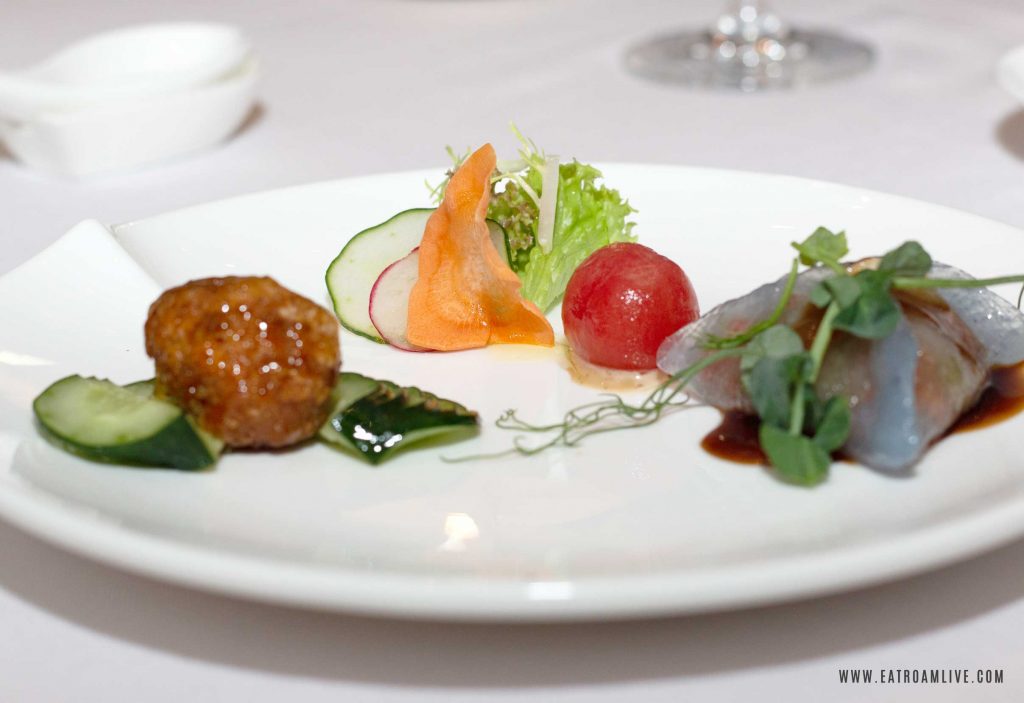 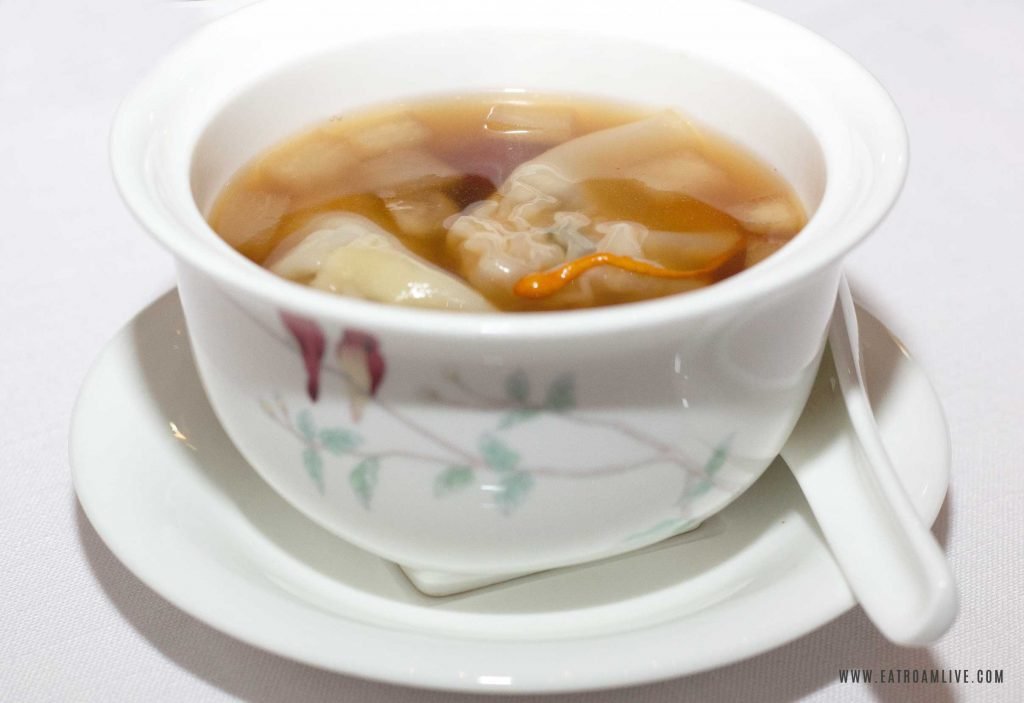 Old Cucumber Soup with Seaweed and Omnipork Vegan Meat Wanton is a warm and mildly tempered wanton broth with melon, old cucumber and red dates, tempered with seaweed. While I enjoyed the flavours of the soup, I found the seaweed a tad too overpowering, but then I’ve never been a fan of seaweed. 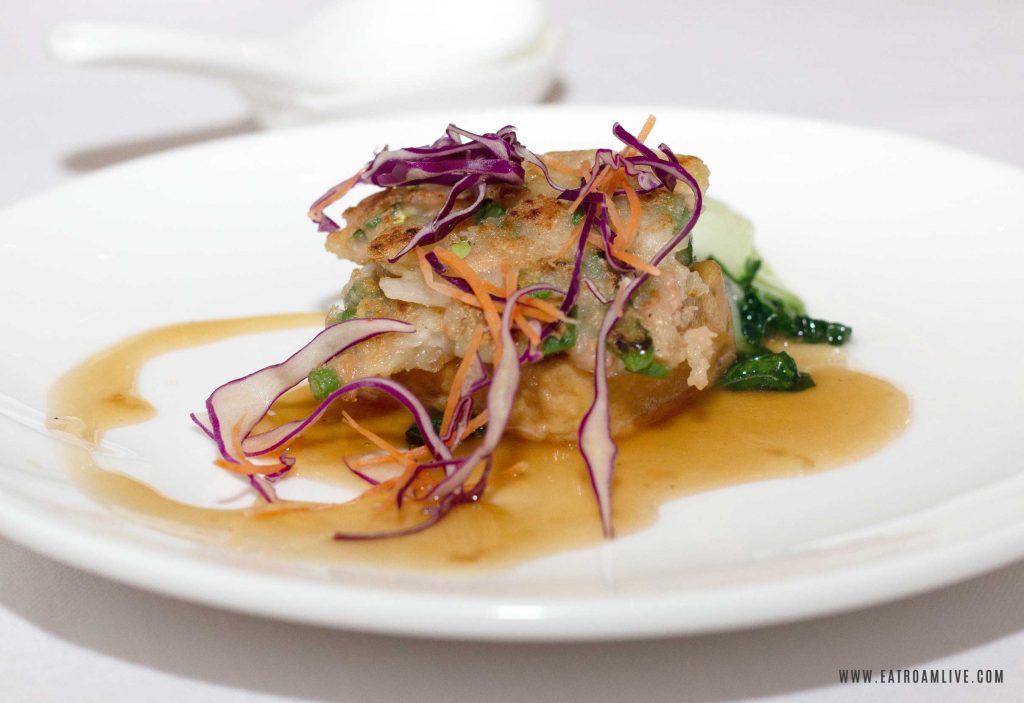 Next up, Pan-fried Fresh Chinese Yam with Omnipork Vegan Meat Omelette Served and Stewed Beancurd stole the show. The chef prepares the omelette using beancurd skin and soy milk to replicate the original and the taste and texture of this vegan omelette is strikingly close to a real one. The crunchy yam bits give the omelette a good flavour and I loved the browning of the sides. Crispy, crunchy and a very satisfying part of the meal! 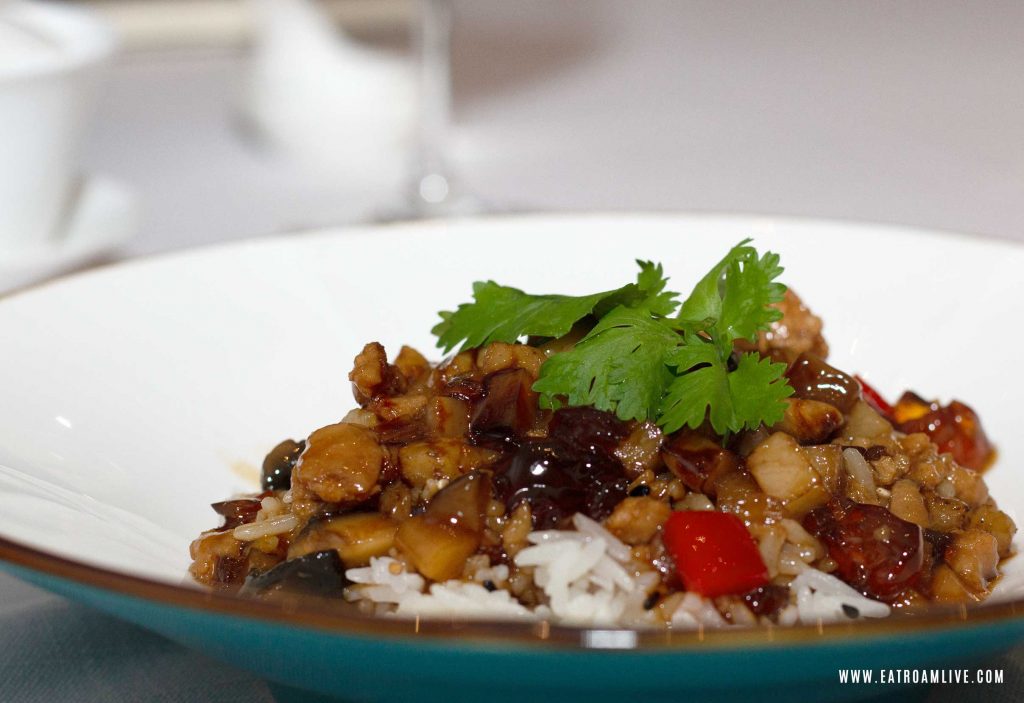 The main dish of Braised Omnipork Vegan Meat with Capsicum, Assorted Mushrooms, Peach Gum and Eggplant in Sesame Soy Sauce, Served with Steamed Fragrant Rice is a traditional Chinese indulgence, the rice is braised with peach gum (to replace the animal fat in the original) and sautéed with rest of the ingredients in a thick soy sauce. Peach gum has numerous nutritional properties and is often touted as a well-kept Asian secret to beautiful skin. No surprises then that I wiped my plate clean! 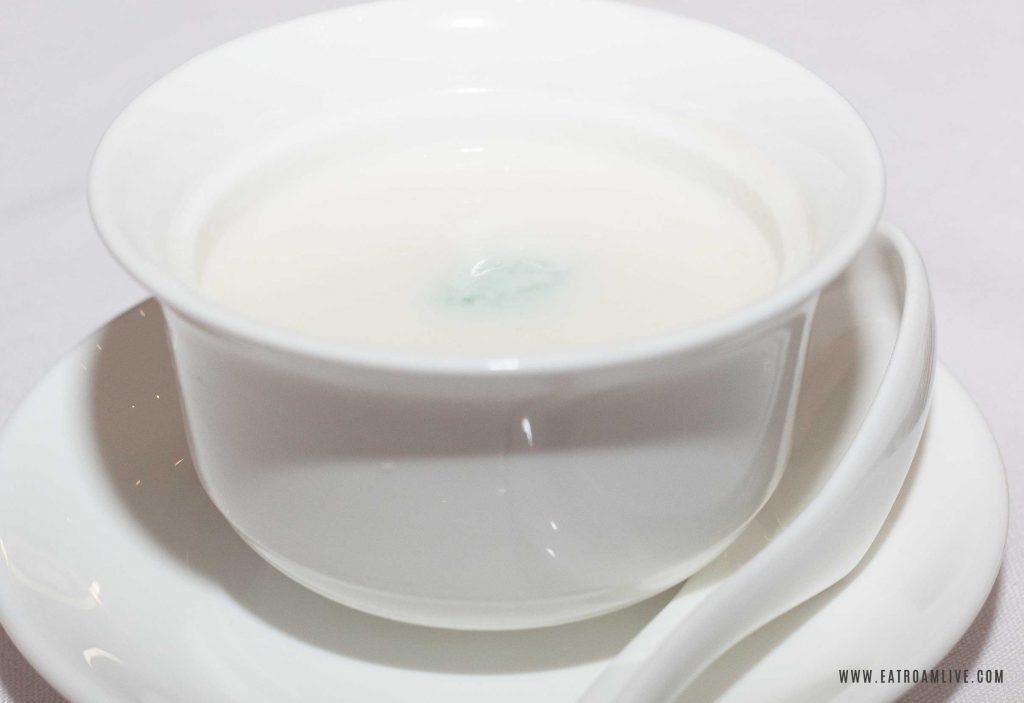 Time for dessert and rounding off the menu is Hot Cream of Almond with Passionfruit Chia Seeds Lava Glutinous Dumpling. The ‘almond’ lover in me was thrilled to taste this warm dessert which was indulgent and rich with the fresh almond cream, at the perfect temperature. I would have preferred for the passionfruit chia filling to be slightly less sour but the overall combination was appealing. 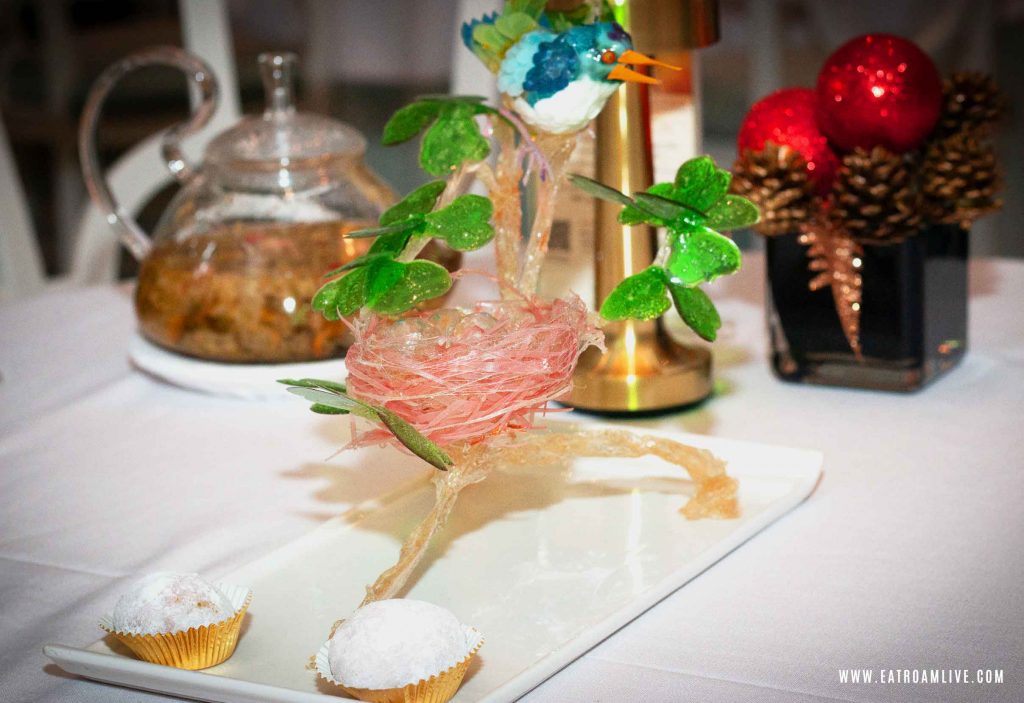 Surprise treat of the day – Mochi Flour Pistachio Dumplings – delicately made mochi (sweet Japanese rice flour) stuffed with crunchy pistachios was the surprise package for the day and I quite enjoyed the raw, nutty flavour of the dish.

Overall, we immensely enjoyed the experience at Jade. Full marks to the chef and team for level of detail that has gone into creating this vegan version of a traditional Chinese meal. Many of the replacements are innovative experiments that successfully replicate the flavours of the respective originals. The quiet and elegant décor and attentive staff who make sure you are comfortable without being intrusive are big positives. However, since 4 of the dishes use the same vegan meat, Omnipork, the texture can feel repetitive at times. Would be great to have a version 2 with a variety of plant-based vegan meats with different textures.

Enjoy a memorable evening in a grand setting and with some good food and explore a traditional cuisine in a form that you haven’t before. Xièxiè Jade.

« Vegetarianism is Good for the Economy too
4 Top Vegetarian & Vegan Restaurants in Sydney, Australia »

Preethi & Ganesh are our favourite writer-photographer duo. While Preethi is juggling two hats being mom to a naughty and adorable three-nager, and working as a HR Marketer; Ganesh is a Technology Sales Professional by week and a sports enthusiastic and passionate photographer over the weekend. While Preethi is a foodie, music lover, ardent toastmaster and a travel buff; Ganesh enjoys running (6 full marathons and counting) and plays cricket for a Singapore League team. Luckily for us, they share a common love for all things food (as long as its vegetarian) and enjoy working together on articles -  his captures add the spice to her words.