Housed in the culturally rich district of Kampong Glam, Flying Monkey is an Indian Restaurant and Bar that brings funk to Indian dining. The restaurant serves Pan-Indian cuisine alongside classic cocktails with an Indian twist.

What’s behind the name you ask? Anyone familiar with Indian mythology knows Hanuman, the Monkey God who would fly great distances. It is from this reference that the restaurant derives its spunky name.

The ambience is lively, with colourful murals adorning the walls and quirky accents spread throughout the place. 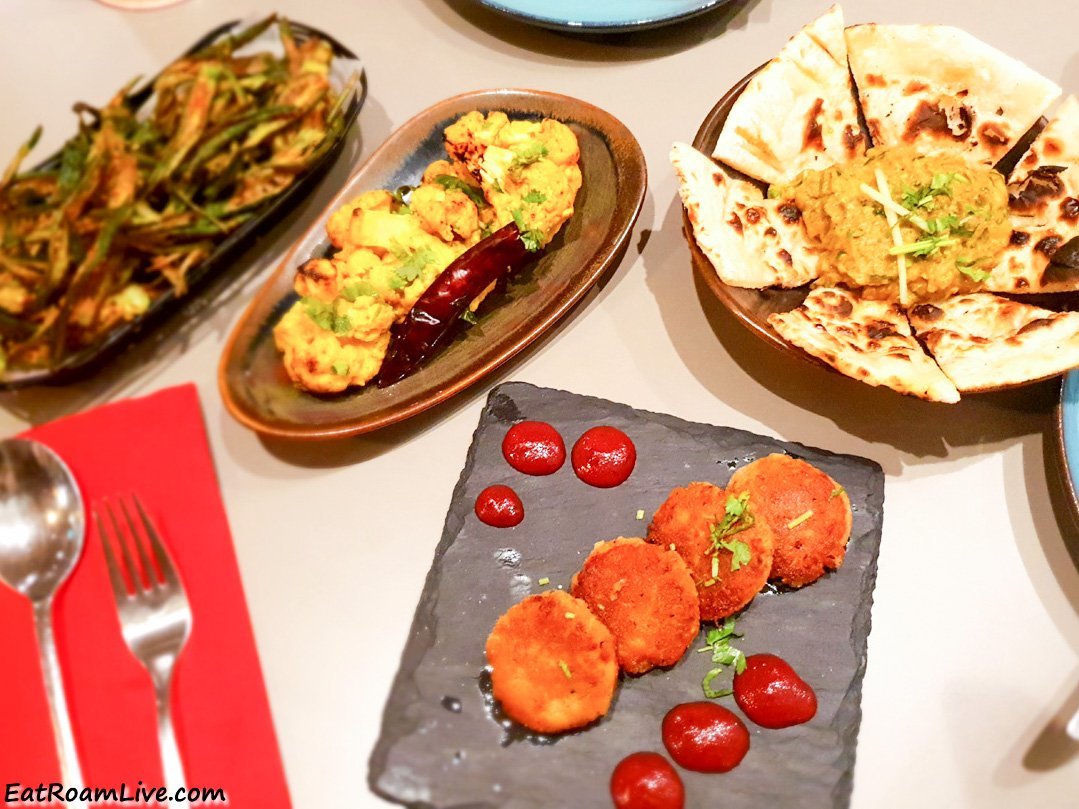 So, Flying Monkey isn’t just about the food, they also serve kick-ass cocktails. I’m more of a wine person myself but even I couldn’t resist being impressed. The cocktails are creative and unexpected, and come with an Indian twist. So you’ll see your favourite classics with ingredients like Jaggery Syrup, Cardamom, Chai and Rooh Afza (an iconic Indian Rose Syrup) on the drinks’ menu.

Some of their popular cocktails are The Flying Monkey (Monkey Shoulder Whiskey, King’s Ginger, Jaggery Syrup, Bitters) and Mind It! (S$18, Monkey 47 Gin Infused with Jasmine, Maple Syrup, Fresh Mint & Lemon). They readily offer bespoke cocktails too, so for both rounds of drinks, we asked the bartender to surprise us.

The cocktails hit all the right spots. Besides being surprised, we were also wowed. The favourite from round 1 was a Rum-based Margarita with a hint of chilli, and the whisky-chai concoction won round 2 hands down.

I love the concept of Small Plates at Flying Monkey as it lets you taste a variety of dishes. We started our meal with a few of these, starting with Kurkuri Bhindi, you would be hard pressed to think of a more perfect dish to represent Indian Tapas. Thinly sliced okra coated with spiced gram flour and fried, the Kurkuri Bhindi is a delicious snack that is crisped to perfection and great to munch on with ‘em cocktails! We had several fabulous dishes at Flying Monkey, but if I was forced to pick just one star dish, it would be this. *Kurkuri Bhindi can be done vegan upon request.

Moving on, we also tried the Mustard Gobhi (S$8), Goat Cheese Tikki and Baingan Bharta (S$10), along with a side of Sheermal (S$8). Cauliflower is my happy vegetable, and I simply loved the Mustard Gobhi. Big florets of cauliflower are marinated and chargrilled, resulting in a flavourful dish with pleasant hints of mustard. The Baingan Bharta is another brilliantly done dish that is served with naan. It tastes smooth and creamy and *can be done vegan upon request.

The only small plate that didn’t sit too well with me was the Goat Cheese Tikki, and that has more to do with personal taste (I’m not a fan of strong cheese) than the preparation. These are patties made with potato and goat cheese and served with a delicious plum sauce. Black Pepper packs a nice punch to the dish.

Accompanying our tapas was Sheermal, which is a saffron flavoured flat bread cooked in a clay oven, the traditional Indian tandoor. The Sheermal has Persian origins and is available in some parts of India, yet this was my first time tasting it. While you can eat it with any of the dishes, Flying Monkey’s Sheermal tastes great and I enjoyed it mostly on its own. I especially loved the stand out taste of fennel seeds and the hints of saffron that combine to give it a very rich flavour.

After we had polished off the small plates, we just had enough space to share one Big Plate and Lasooni Saag (S$16) seemed to be the obvious choice. This is a dish of spinach and no its nothing like your everyday Palak Paneer. The spinach here is not finely ground and has a nice texture to it. The mashed spinach is tempered with burnt garlic and tastes awesome. Served with Tandoori Roti, the * Lahsooni Saag can be done vegan upon request as can the Tandoori Roti.

Getting to dessert, nothing like a plate of piping hot Jalebi (S$10). For the uninitiated, Jalebi is a traditional Indian sweet that kind of looks like a pretzel. These are made with a mix of white flour and gram flour and fried till crisp. These are then dipped in a flavoured sugar syrup and are best eaten with Rabri that Flying Monkey serves on the side with Jalebi.

The whole concept of Indian Tapas sat very well with me. To top it, the food and drinks are all amazing with a cool, sassy vibe. Definitely a place that you’ll return to. In fact, Flying Monkey will be going right to the top of our list of the Best Vegetarian Mid-Range Indian Dining in Singapore.

As far as vegan dishes go, Kurkuri Bhindi, Lasooni Saag, Baingan Bharta – can easily be done vegan upon request but the restaurant insists that they cannot guarantee against cross-contamination as ghee, butter, dairy and meat are used in the kitchen. If you’re ok with that, then ask for the Vegan Menu and you’ll have a choice of over 10 dishes to choose from.