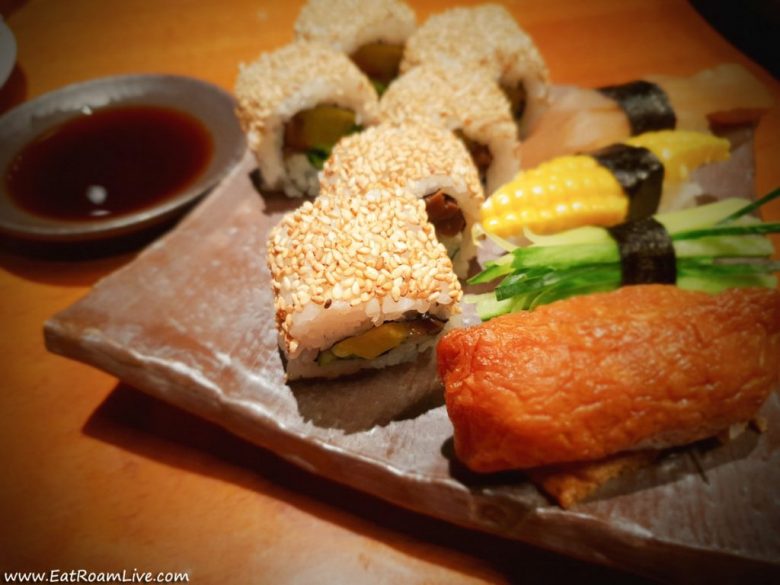 Given my fantastic previous experiences at Grand Hyatt Singapore – Singapore’s first vegan Italian lunch buffet at Pete’s Place and the wonderful, specially curated Vegan dinner that they hosted a few months ago – a trip to Mezza9 was absolutely called for.

The name Mezza9 stems from the mezzanine level of Grand Hyatt that the restaurant occupies, and the ‘9’ points to the nine different dining and wining experiences the restaurant offers. Craving some authentic plant-based Chinese or Japanese food while your partner wants a vegan salad? Not a problem, Mezza9’s got you covered!

The 9 different stations at Mezza9 include a Western Grill, Chinese, Thai, Japanese & Sushi, each with plant-based options. You can even enjoy fabulous vegan salads at the Seafood station. Every cuisine here is authentic and has stood the test of time (we’re talking 20 years). Besides these, you can also enjoy desserts from the Patisserie or choose from the city’s largest selection of martinis at the Martini Bar.

The ambience is refined, yet relaxed and the staff and service are top-notch, making for fabulous vegetarian and/or vegan dining.

We started off with the Western menus. The Oxheart Tomato Salad (S$12) is a pleasing combo of oxheart tomatoes, pomegranate and shallots flavoured with tarragon, mint and sumac; light and refreshing. The Ancient Grain Salad would be perfect for someone looking for a heartier salad and would make a great tasting, healthy single-dish meal. Freekeh, farro and fregula are tossed together with toasted seeds, almonds, goji berries, preserved lemon, parsley and mint, in a light dressing. I especially loved the crunch in the salad.

We also tried the Wood-Roasted Beetroot Salad, the only non-vegan item of the night (besides desserts). The slightly savoury taste of the goat cheese perfectly complements the sweetness of the beetroot, and the horseradish adds a much-needed tang to kick the flavour up a notch. As all 3 salads were big hits, I haven’t been able to pick a favourite.

Accompanying the salads was a Pot Pie and a plate of the Wood-roasted Padron Peppers with smoked sea salt. My husband’s reaction to the Pot Pie (S$24) was a bit lukewarm, but I loved it. Mezza9’s vegan pot pie has curried root vegetables and chickpeas encased in a plant-based short crust pastry.

Clay Pot with vegetables in a fermented bean paste; with Wok-Fried Brown Rice

From the Chinese Station aka Steam Basket, we tried the vegan Clay Pot with Wok-fried brown rice, mushrooms, yam, chilli and dark soy sauce. While the brown rice was okay, the clay pot with Braised Beancurd, black fungus, mushrooms and colourful bell peppers in a fermented bean paste was a huge hit — one of the top dishes of the night. Highly recommended!

The Thai Station at Mezza9 has only 1 vegan dish, Yum Makeua Yao (S$16). This Thai style grilled eggplant is flavoured with chilli, mint and tamarind, topped with tomatoes and shallots. One bite of the eggplant had us grabbing mouthfuls of the grain salad and fried rice. This is the kind of spicy that brings tears to your eyes (or at least my eyes) and numbs the palette. That said, I thought this was one of the tastiest dishes of the night — absolutely brilliant. Highly recommended but only if your spice-tolerance is extremely high or request for it to be toned down a notch, or five.

We were already bursting at the seams but I dare you to look at the dessert menu and leave without trying something – all of their desserts are amazing and oh so pretty. Based on the food, our expectations were high and Mezza9 Dessert Extravaganza (S$38) did not disappoint — 5 sinful desserts & 3 scoops of ice cream on one enormous platter. The most creative of the lot had to be the Mezza9 Flower Pot, with juicy roasted pear and berries atop chocolate soil. While hubby’s favourite was the rich ‘La Esmeralda’ Chocolate Pudding, I thoroughly enjoyed the refreshing Peach Compote with vanilla custard, raspberries and caramelised puff pastry. The dessert platter also has a baby portion of the Banana Flour Crepe, which is vegan and Gluten-Free and can be ordered a-la-carte whence it comes with a coconut ice cream. The Mezza9 Dessert Extravaganza can easily be shared among 4, or you could always pick any of the desserts on the menu.

Kudos to Grand Hyatt not just for refreshing Mezza9’s menus to cater better to vegetarians and vegans; but also for their global philosophy that is focused on sourcing and providing delicious, fresh, flavourful, healthy, yet environmentally sustainable food options. From no single-use plastic to distributing digital newspapers, a rooftop garden with organic crops, 100% food-waste composting and sustainable seafood sourcing, Grand Hyatt is making all the right choices. A great and responsible dining experience!