Joie by Dozo – Meatless Fine Dining for Everyone, at Orchard: Review

Chances are you would have heard of Joie by Dozo, especially if you’re vegetarian. Located on the rooftop garden of Orchard Central, Joie by Dozo presents a refreshing concept that specialises in modern meatless cuisine inspired by Japanese-European sensibilities and flavours.

But don’t think for a minute that Joie is your regular vegetarian restaurant. As the owner, Mr. Huang Yen Kun says, Joie is not so much about vegetarian dining as it is about vegetables and what they can do. It is about innovative natural fare prepared with the freshest vegetables, fruits and herbs, beautifully plated and served in a sophisticated, fine-dine setting that also affords sweeping views of Orchard and the streets below.

The restaurant practically showcases vegetables in a new light. Mr. Huang mentioned that it took them as long as 2-3 years to perfect some of the recipes. The effort that has been put in in the food reflects in every dish, as there is ample play of colours, textures and flavours.

You can choose from the 6 Course Set Lunch (S$38.80++) or the 7 Course Set Dinner ($68.80++). We tried the 7-course dinner menu and based on what we had, the meal is absolute value for money. For each course, there are enough options to choose from, so it would take several visits before you’d come around to reordering the menu dishes.

The restaurant also caters to dietary requirements, offering a Vegan Menu and a Gluten-Free Menu.

The Indulgent 7-Course Meal at Joie

Moving on to the food. While we looked at the menu, we were served hot Green Tea with hints of a berry flavour. The tea refills continued through the meal and after.

The meal service then kicked off with a beautifully presented Passionfruit Cooler to cleanse the palette. This was followed by the Chef’s Selection of Starter. We were served a platter with an assortment of appetisers which included a seaweed cracker with a whiff of wasabi sauce, cracker with raspberry sphere and a salmon sashimi look-alike that turned out to be carrots. I’ve never had sashimi, but hubby who’s recently turned veg said that the sashimi was right on point. Seaweed is a big nay for me, so upon request, my platter was done sans the seaweed. 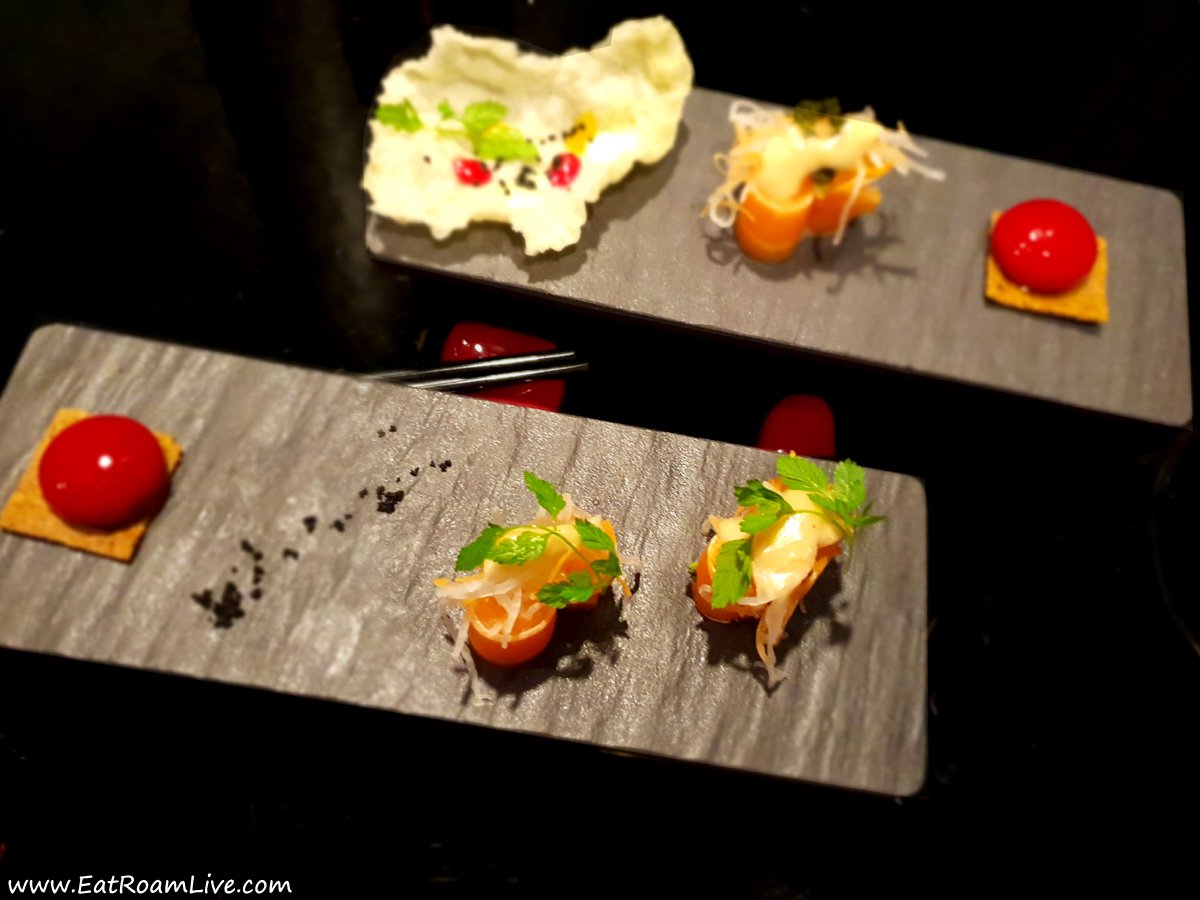 Moving on to Side Dishes, we opted for Baby Root Vegetables Garden and Joie’s signature Gratinated Champignon with Mozzarella, both dishes hit all the right notes. The baby root vegetables are a colourful visual treat, tasty and served with a truffle mashed potato which tastes great. The mushrooms are covered in a crisp mozzarella layer and served in an escargot plate, with bread and Belgian endives on the side.

For the Cold Dish, we tried Transparency of Pear – folds of pear tataki, layered with a delightful apple mozzarella and basil dressing; and Vegetable Sashimi on Ice with Oyster Leaf Shooter Glass. The Vegetable Sashimi is fancy, painstakingly beautiful, and you’re instructed on the correct way to have the shooter so it tastes like an oyster. The “sashimis” are done with carrots, coconut meat and pear and it’s incredible how much the carrot sashimi resembles salmon, both visually and in taste and texture. Presentation of both dishes is flawless and there is immense play of colours and molecular gastronomy. If you opt for the 6-course menu, you’ll be skipping the Cold Dish.

Next up, the Soups! The Pumpkin Velouté served with tomato ciabatta; and the Clear Tomato soup with Garbanzo, orzo pasta and a spinach dumpling both taste great but the pumpkin soup won the round.

When it was time for Mains, on the staff’s recommendation, we decided to go with Joie’s signature dishes – Grill Summer Mushroom Steak on “Pu-Ye” Hot Stone and Wild Rice with Eggplant Terrine – and we’re glad we did. The grilled monkey head mushroom is a great dish that is served sizzling on a hot stone, very zen. The steak is high on flavour and presentation, with a side of truffled mashed potato and an extremely tasty sauce with a hint of mustard.

The Eggplant Terrine is delicious again, and tastes much better than eggplants usually do. I’m not big on rice but Joie’s sautéed wild rice with baby radish, pine nut, and baby carrot is excellent and I could eat a bowlful by itself.

With the mains done, it is time for Dessert & Drink. We tried 3 of the 5 desserts on the menu and each one was better than the next, so hard to choose favourites but I’ll try. The Liquid Chocolate is simply divine, the Warm Chocolate Cake with Vanilla Ice is as good if not better. If I had to pick from the two, I’d give the round to Liquid Chocolate simply on account of being less common. However, it was the third dessert, the Yogurt Pudding, that ended up being the big surprise. As they say, don’t judge a book by its cover – don’t underestimate this going by its name. Joie’s Yogurt Pudding is homemade yogurt that is slightly sweet, topped with rice puffs, chia seeds and a touch of chopped berries. Simple, yet heavenly.

For Drinks, we went with the staff’s recommendation and opted for Hawaiian Blue – a mocktail of lychee and blueberry; and Ice Mallow Apple Melody – an invigorating blend of mallow flowers, apple and guava juice. While both drinks are refreshing, I would highly recommend the later over the former, any day.

Overall, our dining experience at Joie by Dozo was fantastic. Every dish that we had was top-notch, the presentation is simply amazing and the price-tag is great for the quality and experience you’re getting. The one thing I would like to mention is that some of the dishes are created to resemble meat/seafood in looks, taste and texture (don’t worry, no faux meat or soya here though). So if you’re someone who doesn’t like the taste of meat/seafood, keep that in mind. You will still have plenty of choice, there are enough Asian-inspired and Western-inspired dishes here to keep everyone happy. So head over now and indulge in some fine meatless dining.