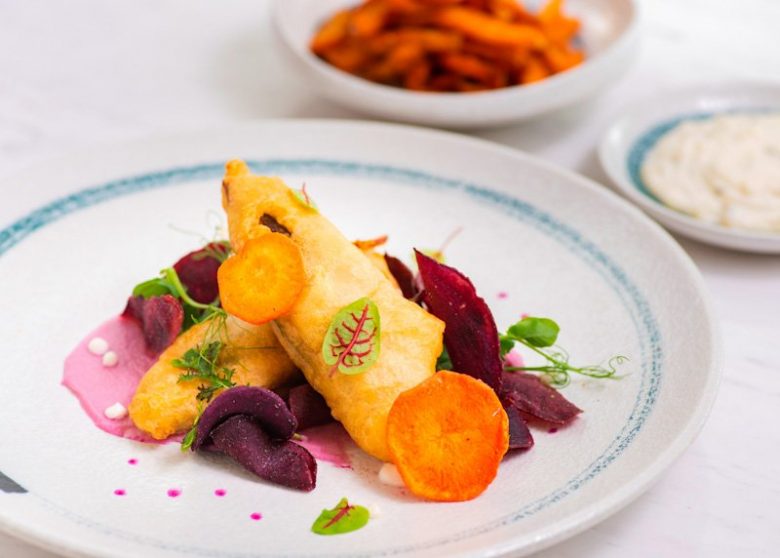 2018 was a great year for veganism in Singapore! We saw people and restaurants embracing the movement, we saw the launch of several plant-based meats, we saw vegan pop-ups happening around town and vegan dining events packed out. Shangri-La Hotel, Singapore is now taking the ‘party’ into 2019 by announcing that they’re working on refreshing their menus to include more plant-based options.

So, what prompted the move? Says Executive Chef Franco Brodini, “Looking at the market trend and the increasing demand for plant-based dishes, we want to offer to our guests an additional service and quality driven vegan experience”. Brodini who is a Northern Italian native is currently responsible for the success of the hotel’s culinary management and operations, as well as its food safety management system. His career boasts of 30 years of culinary experience around the world, including a stint as chef saucier at the Michelin-starred La Sosta in Brescia, Italy.

Chef Brodini further remarked that the increase in demand has been seen both from foreign guests visiting Singapore on business or holidays and from local residents who attend events and patronize the restaurants. Owing to this, he has invited Chef Damian Piedrahita to consult on the hotel’s menus and there are several exciting things in the pipeline.

As the chefs busily work on creating new dishes, Shangri-La will be hosting its first plant-based dinner on 20th Feb, in collaboration with EatRoamLive. The Italian Inspired Vegan Menu with Mediterranean Flavours will showcase some of Chef Damian’s exquisite creations. Following close on the heels of this, will be a Four-Hands Dinner with Chef Heidi Flanagan & Chef Damian Piedrahita on 5th March. While the Four-Hands Dinner isn’t exclusively vegan, a 6-Course Vegan Menu will be available for the plant-based diners.

So, who is Chef Damian Piedrahita? Hailing from Uruguay, Damian Piedrahita is a chef with a difference. What sets him apart is the fact that he refuses to use animal ingredients for cooking. The philosophy of his kitchen revolves around creating a true gastronomic culture capable of nourishing the body and making the mind travel; without the use of any animal products whatsoever.

Here, we talk to Chef Damian, to find out more about him and his culinary passion.

How did you begin cooking? Did you always want to be a chef?

I never planned on being a chef. In my teenage years, I studied literature, philosophy, graphic art, and computer science. In my twenties, I headed to Italy with the idea of ​​building my career as a visual effects post producer for cinema. In an attempt to save money for my studies, I had my first contact with the kitchen. But it was not love at first sight, I needed the guidance of great chefs who, with time, taught me and transmitted to me the passion for their work.

How did the switch from cinema to cooking finally happen?

When I finished my studies as a VFX post producer in Barcelona, ​​I had my inflection point, and I became a vegan. It was then that I began to see the kitchen as an art form, a way to communicate effectively. After working as a film post-producer for a year, I decided to return to the kitchen, to take my vision of gastronomy to the highest points that art can allow us. I worked some years more in the traditional kitchen, and after several years of experience in different realities of hotels and restaurants, I decided to leave my work in the classic kitchen, to dedicate myself completely to a kitchen without animal protein.

Was the transition easy?

Far from it! It was a year of great risks – first leaving a safe and well-paid job in the film industry to move to the kitchen; and then leaving the safety of that kitchen, not to mention the good salary, to risk going into and building upon a typology of gastronomy still new. In recent years, I have worked tirelessly in the creation of a new culinary culture, making clear the bases that can serve as a point of reference to show the world that it is possible to create gourmet gastronomy without animal protein, seeking a change that will favour us all holistically. Today I am happy to have risked everything on several occasions, to achieve my goals.

Do you feel that being a vegan chef restricts you where taste and creativity are concerned?

I think the exact opposite happens. Experiencing new ways of expressing oneself with means that have always been considered secondary, exalting them and making them protagonists, requires a lot of work, where creativity plays a fundamental role. There is still a lot of work to be done, and that fills me with enthusiasm and energy to do my job with passion.

You’re here as a consulting chef at Shangri-La Hotel, Singapore! So, what’s in the works? What are your goals regarding their menus?

As a consultant and promoter of a gastronomic culture without animal protein, my goal is to collaborate with the chefs of each kitchen under the project, to share my experience, and include high quality vegan options in their menus, giving an attractive offer valid and at the level of the rest of the dishes of a 5-star hotel.

What else is in the pipeline? Any plans to open your own restaurant?

Not for the moment. In this phase, I think it is important to promote my cuisine so that the culinary culture that I am creating takes shape, and can become a point of reference. From this point of view, working as an advisor allows me to take my kitchen everywhere, and to do my bit for a change and a better future for all.

Well, Chef Damian, we at ERL definitely support you and cannot wait to try your creations. But before you leave, let’s talk plant-based food!

Your favourite ingredient for cooking?

I have a relatively serious love with artichokes and truffles.

Artichokes. I like them for their delicate and complex flavour at the same time, but also for how versatile they are. They can be confit, cream, sauces, bake, chips. Another very versatile vegetable is beet. Cooked under baked salt, or vacuumed at low temperature, they become exquisite.

I am more a melancholic lover of the flavours and not of the dishes. I think that in art, it is easier to identify oneself with techniques, methods, shapes, colours, aromas than with the final result of all this. Can you imagine a painter talking about his favourite painting?

Favourite restaurant anywhere in the world?

Well, I have many restaurants that I like because of their innovation, or their way of working, but I have never eaten there. El Celler de Can Roca, Alinea, Noma, Eleven Madison Park are some names that could become my favourites when I try them. I think they contain concepts that go beyond the kitchen as such, and that seek to transgress, using the kitchen as a means to something, and with that as the end in itself. That is exactly the way of thinking with which I identify myself.

At the moment I have only dedicated myself to eating in street stalls, or food courts to try to understand more globally Singapore’s culture. I have not eaten at restaurants yet, but I do have some places in mind that I will surely visit before I return to Italy.

« Budapest with Kids: 3 Day Family-Friendly Itinerary with Top Things to Do
Spectacular Plant-Based Dining at The Botanic, Singapore »