To say that I was pleasantly surprised when I recently joined a friend for lunch at Black Tap Singapore is an understatement. On a previous visit, I had found the menu lacking in plant-based options, but not so this time. Famous for its burgers and milkshakes, the New York eatery not only offers a splash of SoHo in Singapore, it has now expanded its offering to include a few vegan dishes, on top of the vegetarian options it already offered.

At a great location in The Shoppes at the iconic Marina Bay Sands, Black Tap’s stylish interior is a contemporary mix of woody and metal elements, with groovy old-school tunes and a laidback vibe. At first glimpse, the menu seems full of just a lot of meat burgers, but any burger at Black Tap Singapore can be veganized using an Impossible patty, so you’ll have plenty of choice. 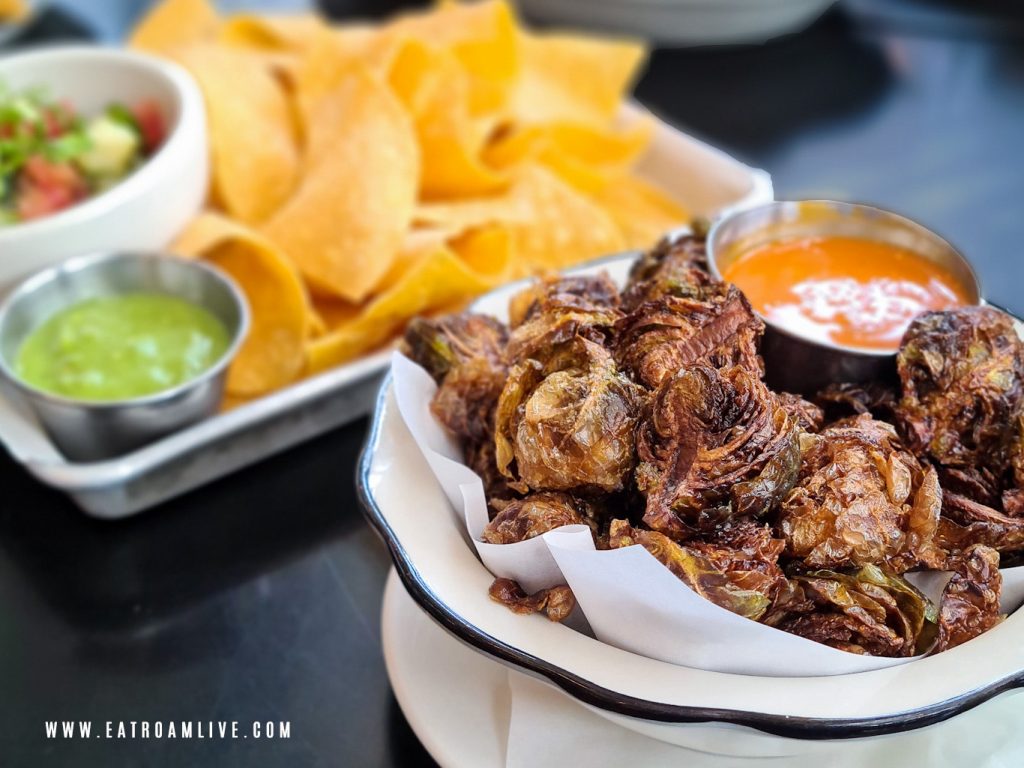 We started off with a couple of sides and a salad. Black Tap’s Crispy Brussels Sprouts (S$14) with sesame-tahini and paprika sauce are nothing like the mushy green blobs I remember from my childhood. These are deliciously crispy with wonderful smoky flavours from the dipping sauce, and good enough to convert you into a Brussels Sprouts fan.

Guac & Chips (S$11) seemed to be a popular choice amongst other diners, and I could see why! The perfectly crisp tortilla chips are well above your typical store-bought version, you can actually taste the corn. Served alongside is a creamy and well-seasoned smashed avo guacamole and a cilantro-based dip (coriander to my British friends). 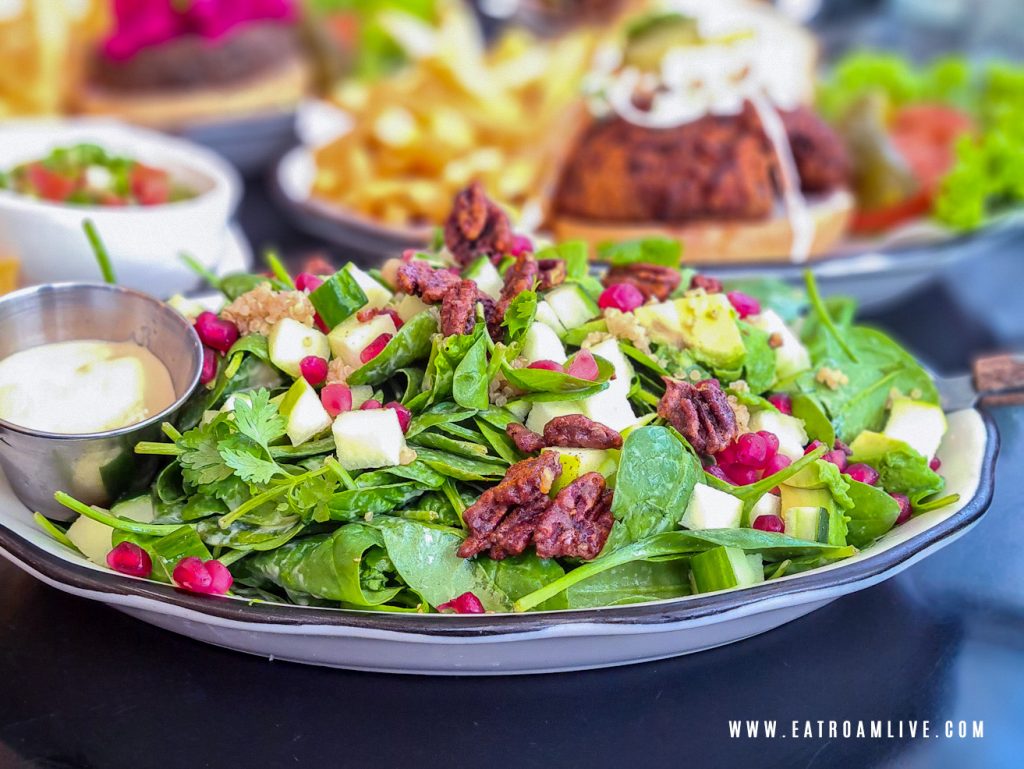 The healthiest part of our meal was the Vegan Spinach Salad. This is a huge portion with baby spinach, quinoa, pomegranate, avocado, apples, scallions, cilantro, spiced glazed pecans. The different flavours and textures come together nicely with the zingy Lemon Miso Vinaigrette that is served on the side. The candied pecans are the hero of the dish, the touch that sets Black Tap’s Spinach Salad apart from its counterparts elsewhere. 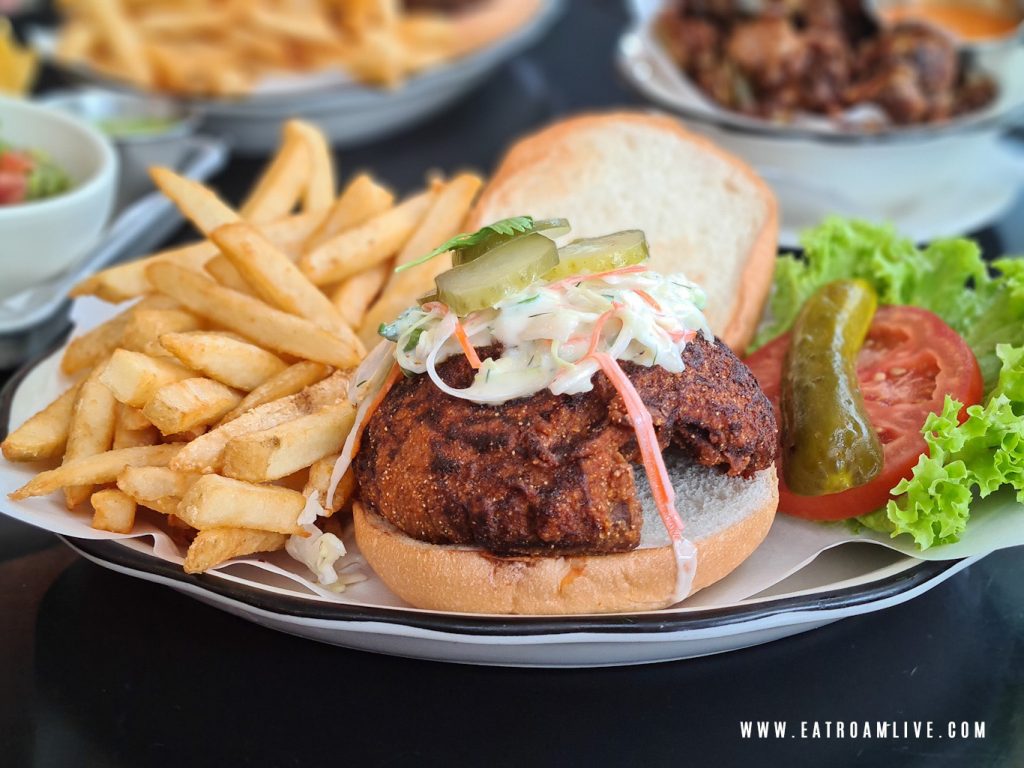 On to the award-winning burgers, I opted for the Vegan Nashville Hot with a breaded portobello, Nashville hot sauce, vegan coleslaw and pickles on a vegan bun. Take a hint from the name, the burger is really hot, thanks to the spicy Nashville sauce. The portobello isn’t made into a patty but is breaded and fried whole, crispy on the outside with a nice soft mushroomy texture inside. The coleslaw is homemade with a creamy tofu sauce instead of mayo. Good vegan burger buns can be hard to find but Black Tap has it just right. Although I would have preferred to have some sauce inside the burger to give the patty extra moisture and flavour, overall, it was a very good burger that would satisfy even the most voracious vegan. If you don’t like spicy food though, the Vegan Nashville might not be for you, but take heart as there are plenty of other burgers to choose from. 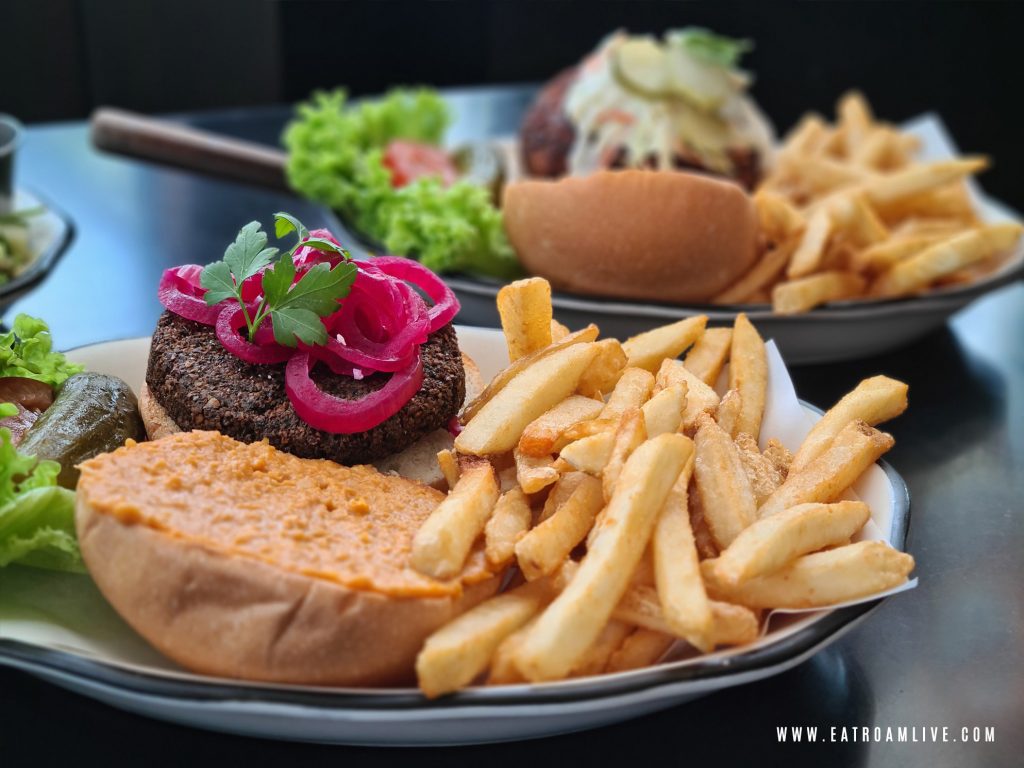 My friend was keen to try the vegetarian Falafel Burger (S$21) for its familiarity and to our surprise the staff informed us that the burger can be veganized upon request by omitting the feta cheese and replacing the burger buns by the vegan version. The falafel patty is light and moist, and full of herbs. Sitting atop the buns and patty are tahini, bright pink pickled onions, and hummus, with pickle and French fries served on the side. Coming from Eastern Europe, I love the pickle which accompanies the burgers.

As I mentioned earlier, any burger at Black Tap can be done with the plant-based Impossible Patty (for a whopping extra S$8) and a vegan bun (for an additional S$3)! 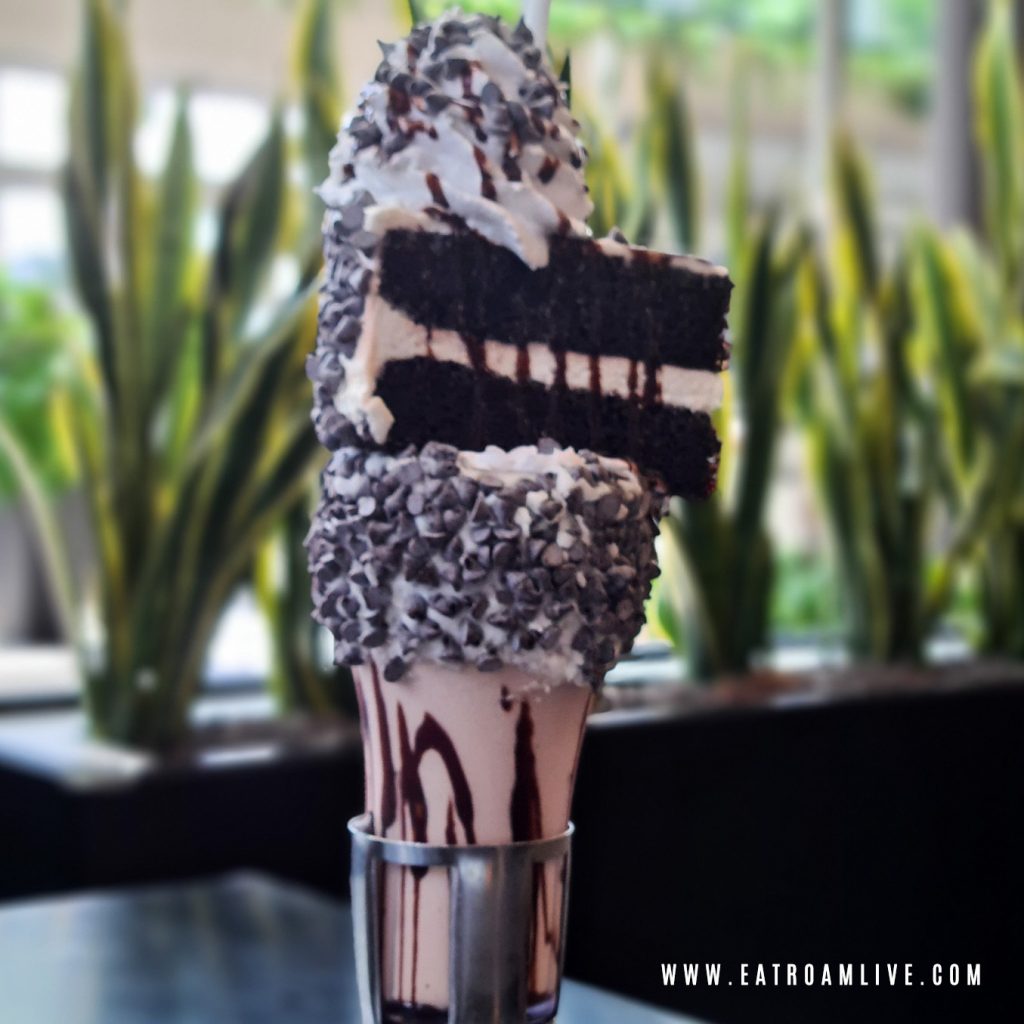 Saving the best for last, the real star here is the Vegan Black ‘N White Cakeshake. This is made using premier ingredients such as apple sauce for a perfectly moist cake, and a coconut milk whipped cream that can pass the test when piled high on the cake. Whatever else you have at Black Tap Singapore, make sure you save some (or rather a lot of) room for this.

In addition to being an Instagram star, this vegan Cakeshake is a truly decadent, sinful vegan dessert which is almost too good to be true. A thick coconut-based chocolate shake, house-made vanilla frosting and chocolate chips on the rim, topped with a slice of rich and moist black and white cake, whipped cream and a chocolate drizzle! If anyone ever tells you that vegan desserts are boring, please oh please take them to Black Tap and the Vegan Black ‘N White Cakeshake will be sure to shake things up for them.

Overall, Black Tap Singapore did not disappoint and its confidence in the vegan menu is well founded. I would rate it as a great place for a vegan or vegetarian meal with your friends. Portions are very generous, so there is absolutely no chance that you will leave this place hungry. The menu is diverse, featuring American classics, tex-mex and a few healthy options. The restaurant also offers a good selection of 18 craft beers – 12 of which are on tap – and cocktails. Please keep in mind that the restaurant doesn’t accept reservations.

Born in Poland, Anna Wojtkowska lived in Denmark for 11 years before moving to Singapore. Having travelled extensively, Anna has made a concerted effort to study food and cooking methods locally, while travelling the world, and has developed a style of her own when it comes to plant-based nutrition and cooking.

Best Açai Bowls in Singapore – The Good, the Delightful & the Healthy